Well sort of… It’s an old song but played in a new way. The rest of the album is mostly new songs but this song got pulled from my last album due to some unsolvable issues – with this recording the song will see the light of day at last!

When I finished my last album I swore I’d never do it again unless I could make the music making process more efficient. In other words not cost many years in time and money.

So gone is the piano recording studio time I paid for last time – replaced with a raspberry pi driven sampled piano that costs about 50euros total. I’m not saying I’m gonna play it the rest of my life but for this album I love it.

Gone are the 10part vocal harmonies that took so long to record and edit. Hopefully replaced with an all around better voice!

Gone are the drum parts that I had no way to rehearse for and couldn’t afford the studio time for anyway – now we have a cahon – which in fairness I’m a lot better at playing than I am at a drum kit ‘cos it’s basically like playing a piano.

The trumpet has been replaced with a harmonica… I realised that my painstaking brass sections were mainly just emulating the natural harmonies produced by this lovely instrument.

This time pretty much every part has to be played start to finish without any editing/cutting whatsoever. I hate editing. Alright maybe 10 or 15mins but literally that’s it… The exception I made in this case was the harmonica track was actually me singing and playing harmonica alternately. I liked it so much I just replaced the singing with silence and recorded a separate vocal – hardly ‘would I lie to you honey?’!

And sadly also gone are the talented guys from Abstract Sun who mixed last time. There’s no way in the world I could’ve made that album ssound so good myself. But this time I’m hoping with easier arrangements to work with and a lot of learning on my part I can do well enough – especially with their work on my first album as a benchmark. Who ya callin’ pigs from last time is especially good as a reference track for what I’m going to do next.

For anyone reading with a bit of mixing know how – I think I made a mistake with the below version in that I tried to put the bass ‘high’ and the piano ‘low’ in terms of their frequency range. Rather than a brave genre breaking decision, it feels more like I was trying to force toothpaste back into a tube… Therefore expect big changes on the next version which may well be the finished single.

Also expect to hear from me more recently. I’ve been working on my twitch channel which is to become a covers channel to attract some attention, as well as doing some tech blogging… as well as working on some podcast themes. 2021 is going to kick ***!

One thought on “New Single on the Way” 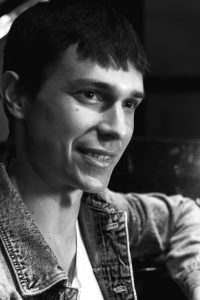 Hi, my name is Rob & I teach singing, play piano, guitar and percussion... I write songs a lot. I have a nice life...

I love listening to Dhafer Youssef, Incognito & Imogen Heap. In the past I have loved listening to Lewis Taylor andJeff Buckley.

I'm an immigrant who escaped the UK just before brexit to live near Florence in Italy. I love spending time with my family, eating healthy food and long distance running. I love reading manga and I draw it myself ocassionally (very badly...)